Mark of the Beast

The following story is an excerpt from the Russian novel, RESURRECTION, published in 1899. When this novel first appeared, it was banned in Russia as both a threat to the church and state. It presents a revealing look at the techniques used by lawyers, courts, the prison system, and the state church to keep the people enslaved. Though the novel takes place in Russia in the late 1800's, there is much similarity to the United States today. 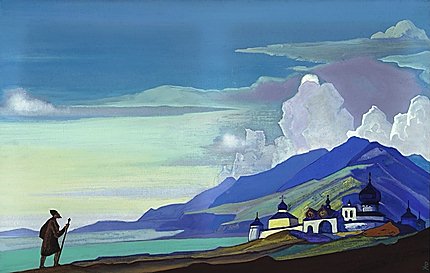 As the story begins, a man name Nekhludoff is being ferried across a broad river. He is listening to a conversation the ferryman is having with an old man who has no name.

"And have you long held this faith?"

"I? A long time. This is the twenty-third year that they persecuted me."

"As they persecuted Christ, so they persecute me. They seize me, and take me before the courts and before the priests, the Scribes and Pharisees. Once they put me into a madhouse; but they can do nothing because I am free. They say, 'What is your name?' thinking I shall name myself. But I do not give myself a name. I have given up everything: I have no name, no place, no country, nor anything. I am just myself.

'What is your name?' 'Man.' 'How old are you?' I say, 'I do not count my years and cannot count them, because I always was, I always shall be.' 'Who are your parents?' 'I have no parents except God and Mother Earth. God is my father.' 'And the Tsar? Do you recognize the Tsar?' they say. I say, 'Why not? He is his own Tsar, and I am my own Tsar.' 'Where's the good of talking to him,' they say, and I say, 'I do not ask you to talk to me,' and so they begin tormenting me."

"And where are you going now?" asked Nekhludoff.

"Where God will lead me. I work when I can find work, and when I can't I beg."

The old man noticed that the raft was approaching a band and stopped, looking round at the bystanders with a look of triumph.

Nekhludoff got out his purse and offered money to the old man, but he refused, saying:

"I don't use this sort of thing, bread I accept."

"There is nothing to excuse, you have not offended me. And it is not possible to offend me." And the old man put the pack he had taken off again on his back. Meanwhile, the post-cart had been landed and the horses harnessed.

"I wonder you should care to talk to him, sir," said the driver, when Nekhludoff, having tipped the bowing ferryman, got into the cart again. "He is just a worthless tramp."

Later that day, Nekhludoff visited the prison in regard to other matters. In one of the exiles' cells Nekhludoff, to his surprise, recognized the strange old man he had seen crossing the ferry that morning. This old man was sitting on the floor by the beds, barefooted, with only a dirty, cinder-colored shirt on, torn on one shoulder, and similar trousers. . .

As in all the other cells, so here also the prisoners jumped up and stood erect when the official entered, but the old man remained sitting. His eyes glittered and his brows frowned with wrath.

"Get up," the inspector called out to him.

The old man did not rise and only smiled contemptuously.

"Thy servants are standing before thee. I am not thy servant. Thou bearest the seal--" The old man pointed to the inspector's forehead.

"Wha-a-t?" said the inspector threateningly, and made a step towards him.

"I know this man," Nekhludoff hastened to say; "what is he imprisoned for?"

"The police have sent him here because he has no passport. We ask them not to send such, but they will do it," said the inspector, casting an angry side look at the old man.

"And so art thou, too, one of Antichrist's army?" the old man said to Nekhludoff.

"No, I am a visitor," said Nekhludoff.

"What is he saying?" asked the Englishman.

Nekhludoff told him the old man was blaming the inspector for keeping men imprisoned.

"Ask him how he thinks one should treat those who do not keep to the laws," said the Englishman.

Nekhludoff translated the question. The old man laughed in a strange manner, showing his teeth. 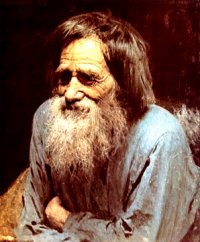 "The laws?" he repeated with contempt. "He first robbed everybody, took all the earth, all the rights away from men, killed all those who were against him, and then wrote laws, forbidding robbery and murder. He should have written these laws before."

Nekhludoff translated. The Englishman smiled. "Well anyhow, ask him how one should treat thieves and murderers at present?"

"Tell him he should take the seal of Antichrist off himself," the old man said, frowning severely; "then there will be no thieves and murderers. Tell him so."

"He is crazy," said the Englishman, when Nekhludoff had translated the old man's words, and, shrugging his shoulders, he left the cell.

"Do thy business and leave them alone. Every one for himself. God knows whom to execute, whom to forgive, and we do not know," said the old man. "Every man be his own chief, then the chiefs will not be wanted. Go, go!" he added, angrily frowning and looking with glittering eyes at Nekhludoff, who lingered in the cell. "Hast thou not looked on long enough how the servants of Antichrist feed lice on men?
Go, go!"